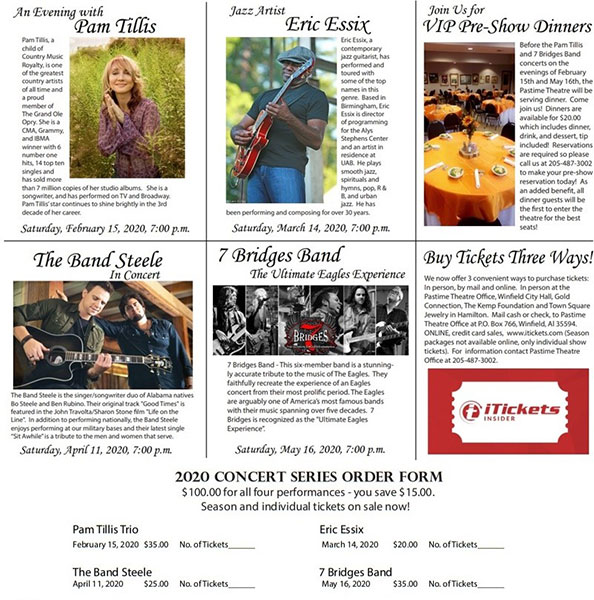 The Pastime Theatre in Winfield, Alabama is excited to announce their 2019 concert series.

The 2019 series will open March 9th with Jason Petty’s “Hank & My Honky Tonk Heroes.” There’s only one Hank William’s and Jason Petty portrays him best. He starred as Hank in New York City’s hit Off Broadway musical, “ Lost Highway”, as well as at Nashville’s world famous Ryman Auditorium. This show is not just a Hank Williams tribute, Jason Petty will tell the story of Hank Williams, his rise to stardom and his fall. Jason will perform many Hank Williams’ hits, such as “I’m So Lonesome I Could Cry”, “Your Cheating Heart”, “Lovesick Blues”, “Cold, Cold Heart” and many more. Backed by an authentic four-piece band, he will pay tribute to stars that influenced Hank and his music and the stars that were later influenced by Hank Williams.

On April 13th the Pastime Theatre will welcome blues legend Tinsley Ellis. Tinsley Ellis, southern blues/rock guitar wizard, vocalist and songwriter, is a bona fide worldwide guitar hero. He has performed in all 50 states as well as in Canada, Western and Eastern Europe, Australia and South America, earning legions of fans with his guitar virtuosity, passionate vocals and memorable original songs. Whether playing deep, slow blues or up temp rockers, Ellis rides a gorgeously fat, pure tone. He has shared the stage with Stevie Ray Vaughn, The Allman Brothers, The Tedeschi Trucks Band, Widespread Panic and many others. This will be a show that any blues fan will enjoy.